My submission for week 37 themed Football 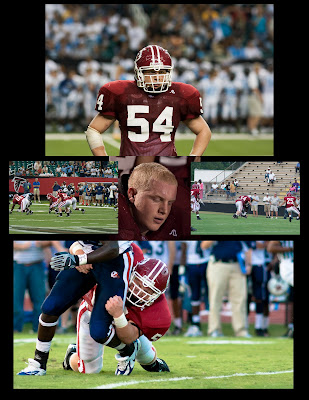 I was lucky enough to get picked up as a school sports photographer while my son was playing football in high school. These are some of the shots I took that included him in the photo.

The top photo is one of my favorites for a couple of reasons -- they were playing in the Georgia Dome which is a pretty awesome thing for a high school kid plus it was one of the first games I got to photograh.

Middle Left - Another shot from the Georgia Dome where you can see the Falcons logo in the background.

Middle Center - Andrew "Bloodyhead" Jones as he was nicknamed. He got that nickname on the first day of practice when after making a hard hit on another player he removed his helmet and his forhead was bleeding. The coach said "God you've got a Bloodyhead." and the rest, as they say, is history.

Bottom - Perhaps my favorite photo of him playing. If you were to zoom in you can just see the intensity on his face. Unfortunately he injured his right shoulder on this play and that pretty much put an end to his career as a linebacker.