Picture of the week for the period 20 - 26 June 2010. I took this one of a Male Eastern Bluebird that has taken up residence in our birdhouse. He was bringing some dinner to Mrs. Bluebird but she wasn't in the birdhouse at the time. We are really enjoying watching the birds and how the interact with each other. They seem to be a bit less weary of our presence in the backyard as well. We don't know how long they've been occupying the birdhouse but we know there are 4 eggs in the nest. According to Birds of the Carolinas Field Guide, Second Edition: Companion to Birds of the Carolinas Audio CDs 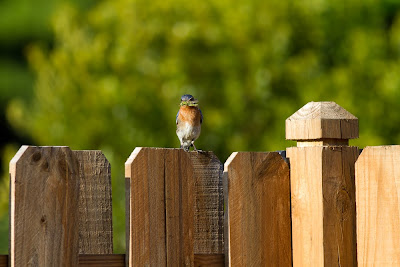 Posted by Zack Jones at 9:15 AM 2 comments: Links to this post

I've always liked those images where you see several shots merged into one. I've been taking multiple shots of the Bluebird that's nesting in our backyard and finally figured out how to merge them in Photoshop. If you had any idea how bad I suck at Photoshop this is a major accomplishment for me. 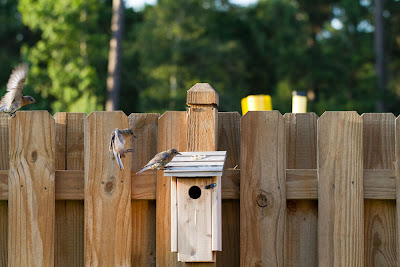 Three Shots Merged Into One 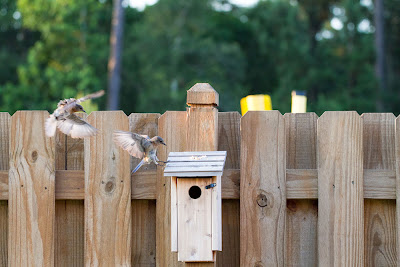 Two Shots Merged Into One 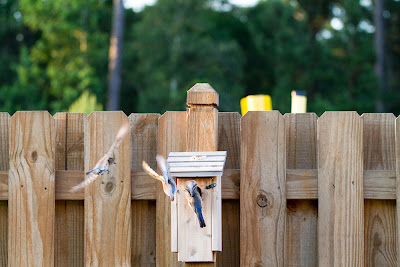 Three Shots Merged Into One
I need to work on my technique a bit. Instead of having the birdhouse centered in the frame I should move it over to the right so I can capture more of the Bluebird's approach to the birdhouse.
Posted by Zack Jones at 7:27 PM 3 comments: Links to this post 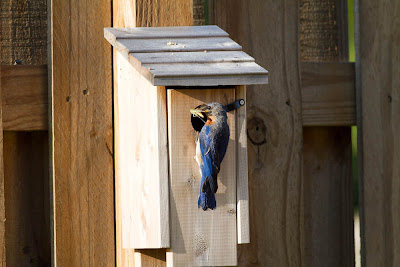 Behind Every Good Photographer There's....

Recently the Digital Photography School weekly challenge was to complete the following statement with a photograph "Behind Every Good Photographer There’s…..".

My submission is shown below. This shot was taken by Donna last weekend while we were on our way out of the Cypress Gardens Swamp in Bushy Park, South Carolina. We love this place and best of all every 3rd Saturday of the month residents of our county get in free so if we're in town on the third Saturday you'll likely find us out in the swamp. But enough about Cypress Gardens in this post I want to talk a bit about the backpack.

Although I can't say I'm crazy about the name the StreetWalker Pro backback from Think Tank Photo. They make three different versions of this backpack the StreetWalker which is designed for a normal size DSLR, the StreetWalker Pro which is designed to hold a DSLR with battery grip and the StreetWalker Harddrive which can also carry a laptop. The main compartment can be configured to store any kind of camera / lens combo I currently own. It easily holds my 400mm lens when mounted to my 7D along with 70-200 lens, 580 EX II flash, better beemer flash extender, 1.4x and 2x extenders, remote shutter release and rain cover -- and that's just what I put in the main compartment! There's pockets everywhere it seems and on the front straps there's two expandable pockets. In these pockets I'll usually put my GPS tracker which I use for geotagging photos in one and my cellphone in the other. I'll do a more complete review of the backpack with pictures of how I load my gear into it soon. If you're in the market for a new camera backpack I'd highly recommend taking a look at what Think Take Photo has to offer. 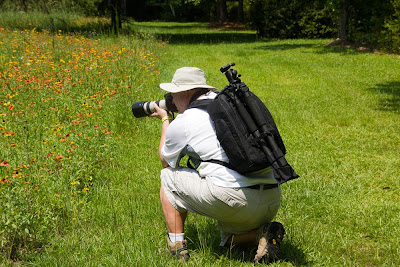 Posted by Zack Jones at 8:22 AM No comments: Links to this post

Recently I wrote about my idea for a picture of the week Blog Post. Now that Donna and I are through with our Project 365 we've started our POTW project. Below is our first choice and I have to say it was tougher than I had expected selecting one image from a week's worth of images. This was taken at the Dungannon Heritage Preserve in Hollywood, SC, by Donna. It was taken using her Canon Rebel T2i which was mounted on a tripod. The lens was the Canon EF 70-200 f/4L with 1.4x extender. Focal lengh was 280mm, 1/350th of a second @ f/6.7, ISO 400. 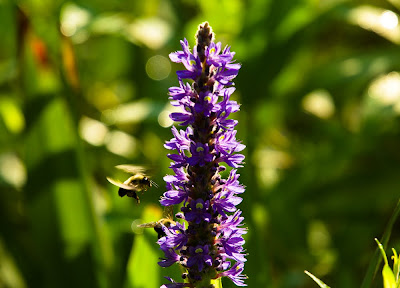 Posted by Zack Jones at 7:21 AM 2 comments: Links to this post

To those of you who, like me, have been blessed to be fathers then Happy Father's Day to you. Today is a pretty tough day for me. On one hand I have two wonderful sons, as well as step-son and step-daughter so as a father I really hit the jackpot. It's sad for me because this is the second year that I can't pick up the phone and say "Happy Father's Day" to my dad.
When I think if my dad I often picture an image just like the one shown below. This is a picture taken of a black and white print that appeared in "The Pilot's Wheel" magazine which was published by the trucking company dad worked for. Dad graced the cover of the magazine and they had a big article about him in it. Honestly I have no idea what the article said as I never read it. I just know it was about my dad and that's all I needed to know. As a national accounts salesman dad traveled a lot but every time he came home he always looked like a million bucks like he does in that picture below.  So even though my dad would have no clue what a blog entry is this one if for you dad. Thank you for being that dad that you were. If I'm half the dad to my kids that you were to me then I have accomplished something in this lifetime. 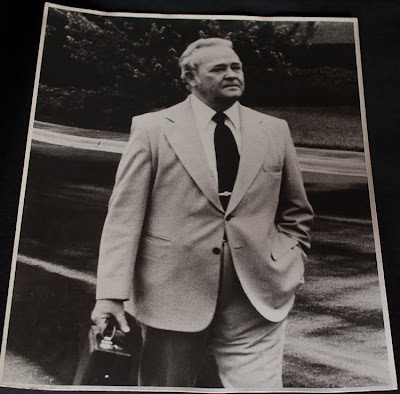 18 years ago she said "I do." Seems like yesterday. Instead of posting a bunch of mushy stuff I'll just post the lyrics to She by Elvis Costello. It sums it up much better than I possibly could....

She may be the beauty or the beast
Maybe the famine or the feast
May turn each day into a Heaven or a Hell
She may be the mirror of my dreams
A smile reflected in a stream
She may not be what she may seem
Inside her shell....

She, who always seems so happy in a crowd
Whose eyes can be so private and so proud
No one's allowed to see them when they cry
She maybe the love that cannot hope to last
May come to leap from shadows in the past
That I remember 'till the day I die

She maybe the reason I survive
The why and wherefore kind of life
The one I care for through the rough and ready years
Me, I'll take the laughter and your tears
And make them all my souvenirs
And when she goes I've got to be
The meaning of my life is
She....She
Oh, she....
Posted by Zack Jones at 7:18 AM 2 comments: Links to this post 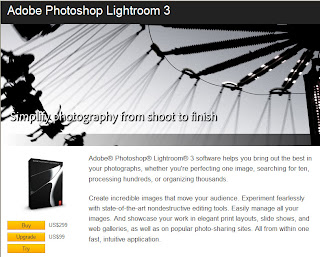 Image capture from the Adobe Lightroom 3 page. Oh happy day! I have been using the beta for the past few months and it's been a pain keeping stuff in sync between Lightroom 2 and Lightroom beta 3. I've downloaded the upgrade and will be installing it as soon as I get home.
Posted by Zack Jones at 7:30 AM 2 comments: Links to this post

Email ThisBlogThis!Share to TwitterShare to FacebookShare to Pinterest
Labels: Lightroom

Learn From My Mistake 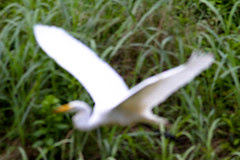 Learn From My Mistake
Originally uploaded by zackojones

This is what happens when you fail to check your equipment settings before going out to shoot birds in flight. Previously I had been using my camera in Single-Shot mode and you guessed it. I forgot to switch it back to AI Servo when we got out of the car. This would have been a killer shot IF I weren't an idiot :).

Posted by Zack Jones at 6:55 PM 3 comments: Links to this post 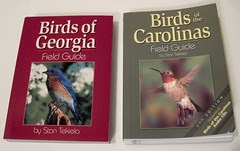 Today the postman delivered a new field guide. For months we have been using the Birds of the Carolinas guide and since we're planning several trips into Georgia I bought the Georgia guide as well. For the curious that's a Ruby-throated Hummingbird on the Carolinas guide and an Eastern Bluebird on the Georgia guide. I highly recommend these guides. If you have a favorite how about telling me about it. I'm always interested in another good book :).

Spotted on Google News....(Click Image to View Larger Version)
Is it just me or does the headline and the summary not go together? Is it possible the rhythm method caused the crash? And no, I didn't click the link to read the story :). I probably should have though.
Posted by Zack Jones at 7:21 AM 2 comments: Links to this post